Menu
Log in
Register
Install the app
You are using an out of date browser. It may not display this or other websites correctly.
You should upgrade or use an alternative browser.

As war descended on Virginia, Lee and his wife Mary fled their 1,100-acre Virginia estate, known as Arlington, which overlooked Washington, D.C. In 1863 the U.S. government confiscated it for nonpayment of $92.07 in taxes.

Meanwhile, Lincoln gave permission for a cemetery to be built on the property, including a burial vault on the estate’s former rose garden. The idea was that, should Lee ever return, he would “have to look at these graves and see the carnage that he had created,” according to his biographer Elizabeth Brown Pryor.

After the war, the Lees quietly looked into reclaiming Arlington but took no action before they died. In 1877 their oldest son, George Washington Custis Lee, sued the federal government for confiscating Arlington illegally; the Supreme Court agreed and gave it back to him.

But what could the Lee family do with an estate littered with the dead? George Lee sold it back to the government for $150,000. Over time, 250,000 soldiers would be buried in what is now Arlington National Cemetery. 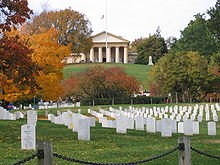 If you ever get the chance to visit Arlington, do so. Watch the changing of the guard (every 30 minutes) and if you're lucky, view a wreath laying. But do so quietly. The guards will call you out for not showing respect.

My wife and I were there during a wreath laying which included a flyover. Lump in throat time. The guard men are incredible. 24 hours a day, 365 days a year they are there. Their march is based on 21. As in 21 gun salute. 21 steps from one side to the other. 21 seconds between turns.

If anybody comes to visit, let me know. I'm there Wed/Thurs mornings, most weeks.
You must log in or register to reply here.

In defense of right to keep, bear arms

Repeal ALL 'Gun Control', Including Licensing of CCW

Entering 2018 with Gratitude to God and Donald Trump