Menu
Log in
Register
Install the app
You are using an out of date browser. It may not display this or other websites correctly.
You should upgrade or use an alternative browser.

We've been going through some wood this year. Been using our wood stove as our main source of heat while we're home. Need to get some more wood split but dreaded the idea of having to stay bent over while operating the splitter or having to put it on car ramps to get it high enough to work with.

So I took on the challenge of raising the splitter. Turnout out pretty good. All that's left is to put some paint on the raw steel to keep it from rusting. Here is a before and after. Raised it up about a foot. Now it's just right. 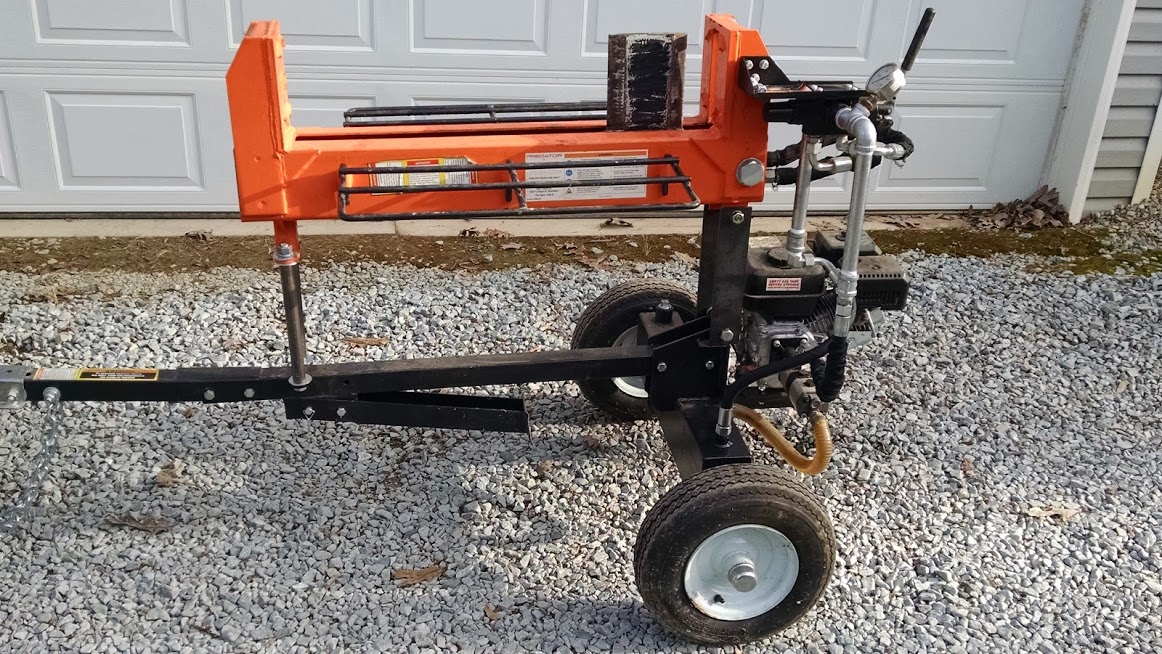 You don't need firewood in Florida anyhow. I doesn't get cold down there.
K

That is why I had 3" of water frozen in the bottom of my bucket truck in 90. Luckily you are right, my wife however thinks 65 is cold. My Harley does not get w winter rest and today it will be 80.

I use to live in Boca and I've vacationed in Orlando. I know Fla. can get cold but it doesn't last long. Mostly long sleeves or sweatshirt weather. On the flip side, I like cold weather during the holiday season. It just helps me get in the mood a little better. I'd take snow on Christmas day as long as it was gone the day after.

Lift kit on a splitter, eh? Now all it needs are some Super Swampers! :anitoof:

The War Wagon said:
Lift kit on a splitter, eh? Now all it needs are some Super Swampers! :anitoof:
Click to expand...

The wheels on it are not rated for highway use. I've considered changing out the hubs in order to take rims and tires that are street legal. Not sure whether the cost is worth it though. Probably not taking it anywhere.

I was back on the wood splitter project again today (Hey! it's only Thurs.). I ordered and received a Prince double detent hydraulic valve. The way it works is you pull the lever in one direction and it continues to move the wedge in that direction even when I let go of the lever. Once the wedge reaches the end of it's stroke, the lever automatically returns to neutral. And the same goes for the opposite direction.

The way it worked before was I had to hold the lever in the direction I wanted it to go. If I released the lever, the wedge stopped. Since my splitter splits in both directions I wanted it to act the same no matter which way it was going.

I ended up having to replumb the whole thing. The in and out were opposite of the original valve. Off to Lowes to get an assortment of elbows, reducers and lengths of pipe. Got it all reassembled and it worked right from the start. except it did spew a little fluid because I accidentally overfilled the hydraulic reservoir. Now if the weather would just cooperate I might get some wood split this weekend.

Damn, i didn't know you were actually going to use it. I thought you just enjoyed working on it. Lol

#860 said:
Damn, i didn't know you were actually going to use it. I thought you just enjoyed working on it. Lol
Click to expand...

We've been heating the house with the wood stove almost every night it gets cold enough to do so. Got a fire going right now. And wood don't split itself ya know. But yes, I like tinkering on things. You mess around with stuff long enough you might even learn something.

That's entirely TOO much work, for a lifted vehicle WITHOUT Super Swampers... :crazy:
K

I still have plenty of stacked wood in the shed. We just had an area cleared for an addition on my shop and got some more wood that way. That's what needs to be split now so that it will be drying for next years colder weather. I'm pretty much a tree hugger. My wife wants to take down more trees on the property but I won't let her. I like the seclusion and privacy they give us.

Continuing saga of "My Friday Project". My wood stove seemed not to be drawing smoke up the chimney like it should. Required further investigation. Bought chimney brush and rods. Took wood stove apart. It has one of those catalytic plates in it and I wanted to remove it so that it didn't get damaged while I was sweeping the chimney. Also want to inspect the fire box. Everything there looked OK.

So up on the roof I went. Bingo! I think I found the culprit. This was the chimney cap. 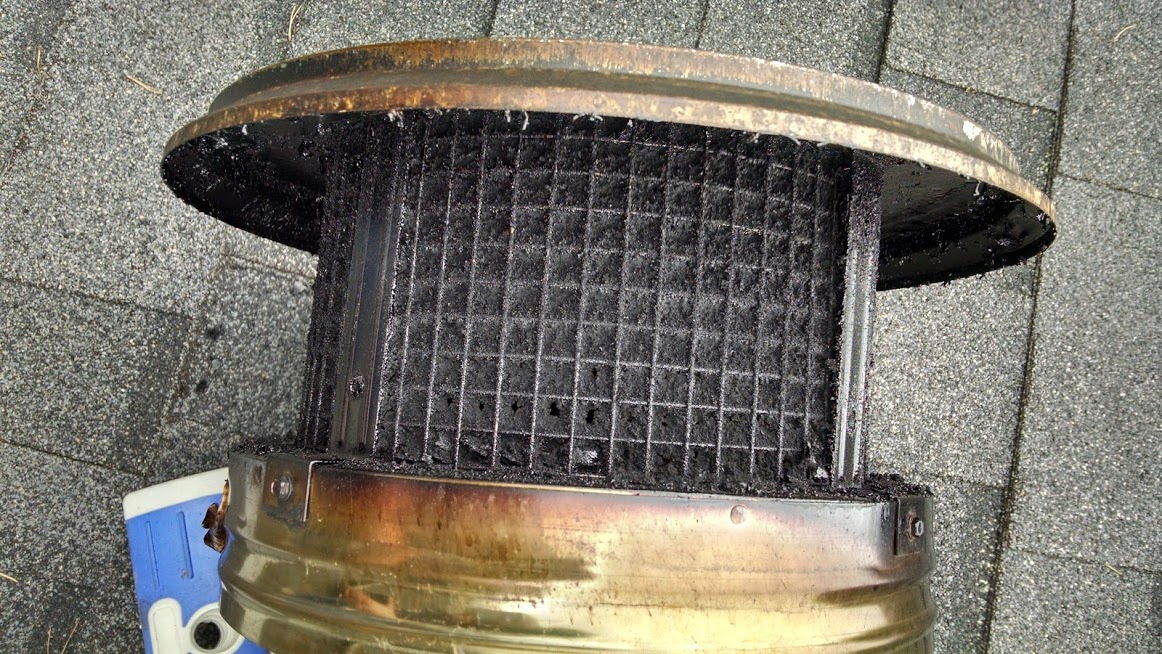 I ran the brush up and down the chimney a couple times and it left a pretty good pile of creosote in the stove. I then cleaned the cap. 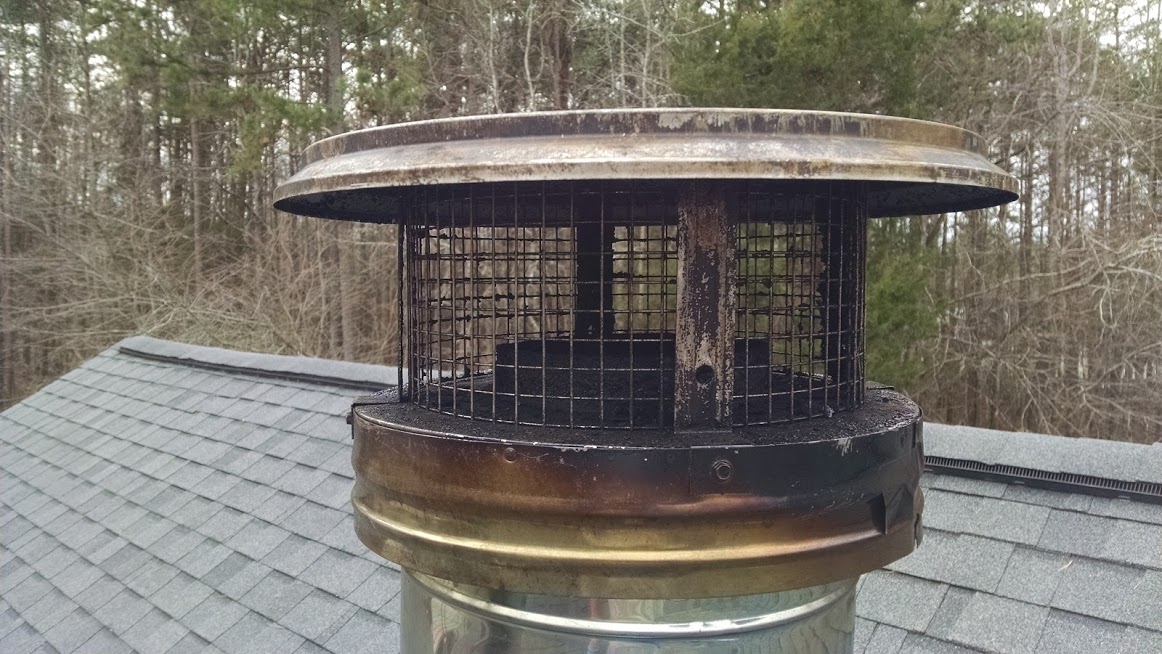 I recently got a new power tilt equipment trailer. One to do anything and everything I'll need from it. It has a place to mount a winch in case you need to load something that can't drive itself up onto it. I transferred a winch from a hitch mount to the trailer. But I saw how scratched up the hitch mount was and didn't want the trailer to start looking the same. I hate rust. So I had a brain storm and placed a thin plastic cutting board between the winch and the trailer mount. Don't tell my wife what I did with her cutting board.
Trailer Mount 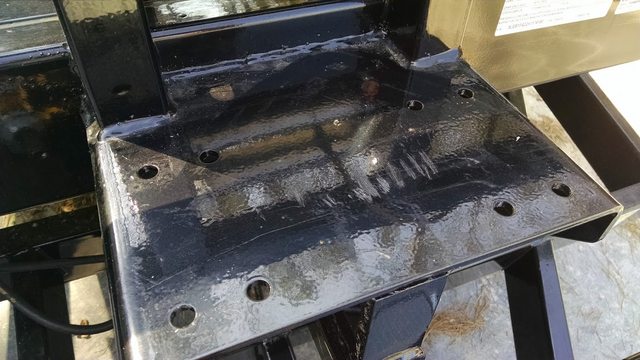 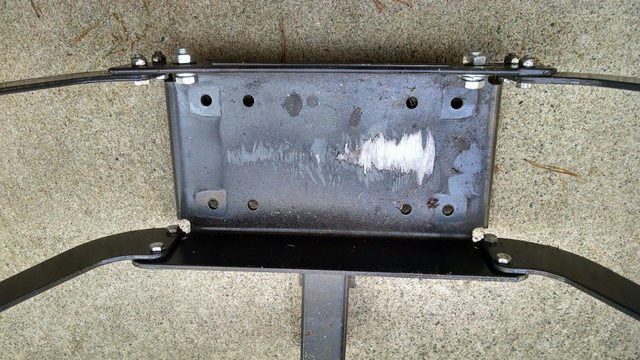 Cutting board trimmed to fit. 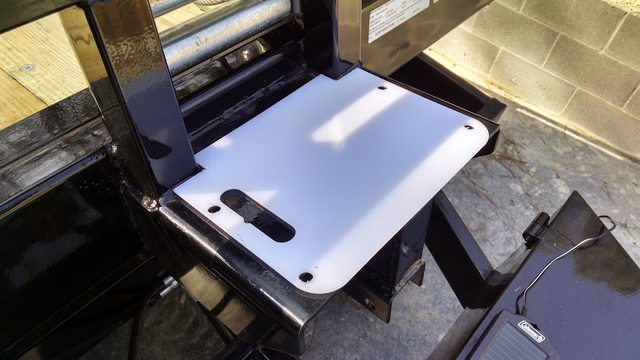 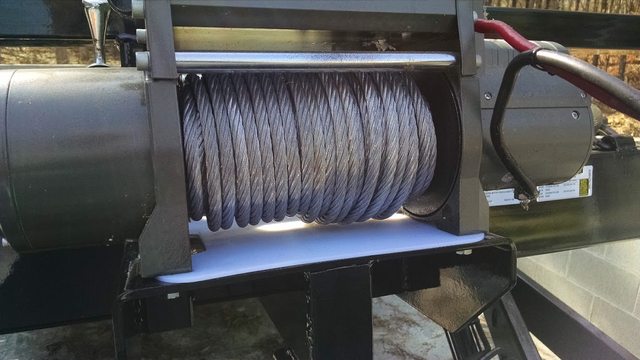 From the other side. I power it from the same battery that operates the tilt on the trailer. 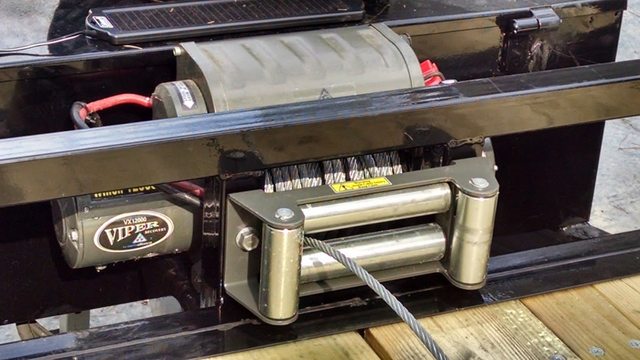